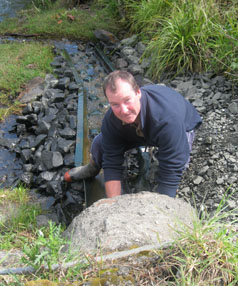 The concept for our unique fish ladders New Zealand’s freshwater fish are part of our natural freshwater ecosystem. They are a traditional food source and an important part of our recreational and commercial fisheries.

Many of our native fish species need to migrate between freshwater and the sea during their life. Their survival depends on it. Fish like whitebait and elvers (young eels) swim up rivers from the sea. They must pass through culverts and over weirs on their journeys. Other freshwater fish, such as the introduced trout, must also be able to move upstream to spawn. Poorly installed culverts or weirs that restrict fish passage will reduce the amount of habitat available for fish, causing a decline in fish numbers.

Here’s a testimonial we have had from Dr Kearney, a Marine Biologist

“The results speak for themselves, prior to the installation of the fish ladders only a handful of fish were counted in the stream above the culvert, however, once the fish ladder was installed, the number of fish climbing the ladder and migrating into habitat above the culvert barrier is nothing short of astounding. Thousands of Freshwater shrimp, hundreds of whitebait and juvenile eels, and tens of common bully were counted.”